From Hand to Mouth: Xena and Bulimia

In the wake of the Columbine shootings and all other copycat attempts, it’s all too easy to blame it all on the media. Jerry Falwell has condemned Marilyn Manson for putting semi-automatic weapons in the hands of impressionable suburban kids, and MGM has recalled copies of The Basketball Diaries. Everything from The Matrix to Seinfeld to any movie containing a trench coat is under fire, and I’ve been troubled by such rampant and unqualified scapegoating. It seems obvious to me that the tragedies couldn’t possibly have resulted from any one stratum — issues like this emerge from such complex system of complex variables.

Where is free will in Falwell‘s equation? I do know, however, that I can’t always so easily dismiss the media; it does certainly shape our daily lives, our values, and our self-image more profoundly than we may realize. If a picture is worth 1,000 words, and if one’s self-image is already diminished and susceptible, he or she may rapidly respond to media images and internalize them. A lot of identification can happen stealthily and unconsciously. The Columbine media scapegoating may seem a bit more credible in that the case for the detriment of female body images of the media, for one, has just made new headway.

Harvard researchers have just released a study with some alarming, if not surprising results: that the arrival of television in the South Seas island of Fiji correlates with the virtual arrival of bulimia. Harvard Medical School anthropology professor Anne Becker, an expert on Fijian eating habits, says that since television was introduced to Fiji in 1995, the country has seen a sharp rise in indicators of eating disorders, especially induced vomiting. A recent story from the Associated Press reads, “raditionally, Fijians have preferred what Becker called a ”robust, well-muscled body” for both sexes. But with television’s advent on an island that did not have electricity until 1985, adolescent girls became more aware of Western ideals of beauty.” The report writes that 15% of interviewed adolescent females in Fiji say they have made themselves throw up. Before 1995, Becker writes, bulimia was virtually nonexistent on the island.

Fiji now witnesses Western ideals via Melrose Place, ER, and Seinfeld, as well as through British and New Zealand series. Understandably, Heather Locklear’s bourgeois thin perfection can perpetuate unattainable standards for the modern women. Such shows are worthy of critique, and the study is a sad story to boot. But there is a flaw here in that the report also cites Xena: Warrior Princess as a problem. Lucy Lawless, as Xena, is hardly an emaciated figure – she not only is fit, but she’s bulky, hardly a supermodel physique. Xena is more like the traditional standard for Fijian beauty – she’s militant, powerful, and certainly a “robust, well-muscled body.” 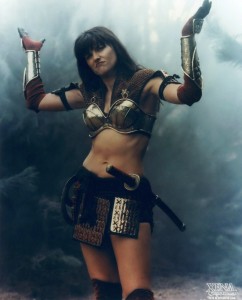 Feminists or women or anyone concerned about body image should applaud Xena, The X-Files, The Practice, and other mainstream programs that showcase beautiful women who look like they have eaten in the past 24 hours. The media may influence eating disorders, but it doesn’t have to, especially if one wishes to believe in free will more than Falwell desires. Must the media be solely responsible for force-feeding women with notions of their own self worth? It’s time that women, especially, be given more credibility for their own ability to process media images. Women should choose with whom they wish to identify — and with greater options of identifiable women, women’s free will cannot be exorcised from the media equation. Perhaps the problem in Fiji is that its television presents such a limited spectrum of female body types — Xena being the best aberration.

We can’t always blame the media, and we certainly can’t rely on censoring it. With 15% of a culture’s female adolescents purging themselves, we sometimes need to fight back. And sometimes that goes with addressing the issue not only as a one-factor equation, but as a complex system of complex variables.