I am not a Puritan. But I’ll admit that I do find Lil’ Kim‘s clothing kind of out there. 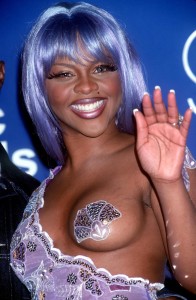 For those of you who don’t know (and I didn’t, until very recently), Lil’ Kim is that hot rapper who seems more of a boudoir pin-up than anyone else in the hip-hop world right now. She seems to combine the TLC/Salt n’ Pepa sexy songstress diva stereotype with an even sexier undercurrent, a female counterpart to the racialized sex god “Smoove B” in the spoof newspaper The Onion. At the MTV Video Music Awards, of which I had the privilege of glimpsing on my roommate’s TV, Lil’ Kim was sporting a half-on/half-off garment:  I’m also not a fashion consultant, but I can describe it as sort of a spandex strap looped over her shoulder on one side and covering half of her torso, with the other side of her body bare, save an interesting daisy-patch covering her nipple. This is like a High Classical Greek statue of a nude man, de-penisized and sprouting a cute fig leaf in its place, thanks to some Roman Counter-Reformation zealots. (Is there a drawer at the Vatican full of dislocated bronze and marble penises?)

I don’t know Lil’ Kim or know really what she’s about, but she seems pretty happy-go-lucky in that picture above. Maybe she’s an independent woman who’s not afraid of taking risks and is certainly not ashamed of her body. She seems to be a provocateur, which I find pretty cool, even if she does seem to project more of a “spunky little girl” image with her name and her clothes–like a rapping Strawberry Shortcake. I’m not much on women who really try to sell their girly sides, but hey, blue hair is cool.

Lil’ Kim‘s website, though, via her record label, Atlantic, tells a different story. It opens with a picture of her prostrate and stamped with a warning label: “PARENTAL ADVISORY: HARDCORE CONTENT,” inviting visitors to “come spend the night inside Lil’ Kim’s palace.” “Leave your inhibitions behind,” it urges, and Lil’ Kim poses as a beacon of power, a tower of strength. Actually, Lil’ Kim seems to be posing for Penthouse in most of her photos, only with more clothes on–this is more of a visual tease or an x-ray vision temptation. She does come off looking a little silly and a little exploited.

I personally believe that while Madonna is a pure capitalist commodity, not a human being, she does in some way subvert the system that she completely sells out to. She does, in the words of a character in Hal Hartley’s film Simple Men, “exploit her sexuality on her own terms.” Madonna calls the shots in all of her work–she is a vision of power, however regressive her virgin/whore characters may be. Lil’ Kim seems to attempt the same, and she succeeds on some level. She certainly is not afraid of anything. Her gaze suggests total power.

The problem is, why should mere power in pop divas be the ultimate goal? Madonna and Lil’ Kim still write out their own exploitation. Madonna doesn’t seem like a real person, let alone one I’d want as a close friend, if Alek Keshishian‘s documentary Truth or Dare is at all on the mark. And is it wrong for a feminist to praise women who sort of replicate patriarchal usurping of power?

It seems that as long as whinier, indecisive creatures like Ally McBeal and Felicity dominate pop culture, Lil’ Kim has her place. She exploits herself, certainly, but she doesn’t seem to take crap from anybody. Even if she calls pasting daisy patches over her breasts and good enough to go.