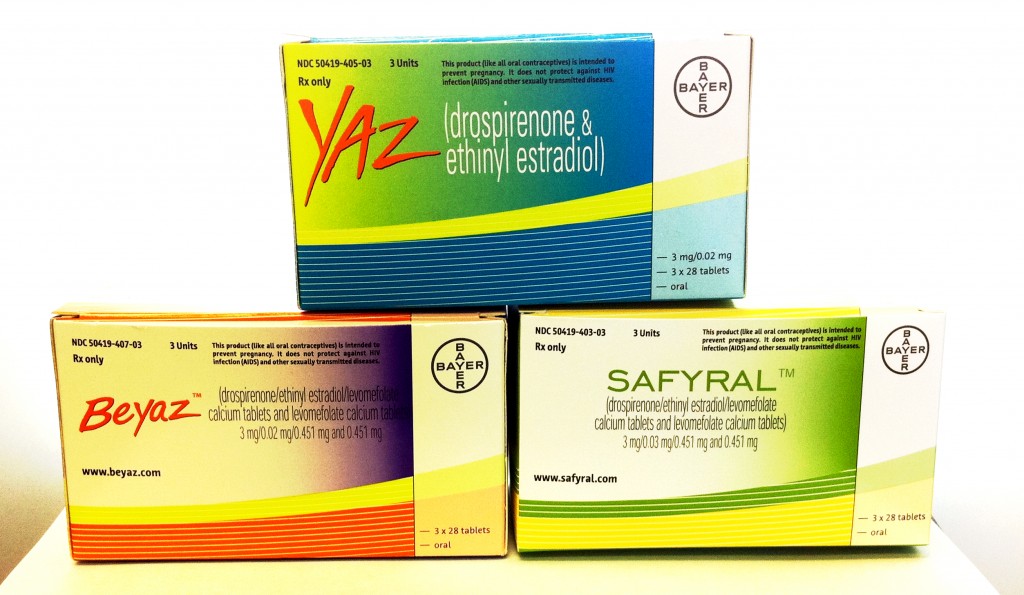 Yasmin, also called Yaz, is an oral contraceptive used to prevent pregnancy. Because Yasmin is a different type of birth control pill, it is also used to treat PMDD (Premenstrual Dysphoric Disorder) and a condition known as Polycystic Ovarian Syndrome (POS). As with any medication, it is important to know how the medicine works, its side effects and drug interactions before beginning a medicine regimen.

Yasmin primarily prevents pregnancy by preventing the ovaries from ovulating, which is the release of an egg into the fallopian tube. It also makes the cervical mucus thicker, which makes the sperm have difficulties passing to the uterus. For added protection, Yasmin changes the lining of the uterus to make the uterine wall less receptive to a fertilized egg or embryo.

Drospirenone, the form of progesterone in Yasmin, is closely related to a drug called spironolactene, which is a diuretic. This hormone has anti-androgenic activity that helps women with moderate to severe acne and other male hormone related problems. It helps work against testosterone and other male hormone overproduction. This is why Yasmin is often prescribed for women with PMDD and Polycystic Ovarian Syndrome as well as women who wish to prevent pregnancy.

Side Effects of Yasmin

The most common side effects of Yasmin are:

Patients who do experience these side effects report that the symptoms normally go away after the first few weeks of taking the medication as directed.

If one is currently taking an ACE inhibitor, ARB (Angiotensin II Receptor Blocker), NSAIDs (Nonsteroidal Anti-Inflammatory Drugs) or Heparin, Yasmin can increase the risk of unsafe levels of potassium in the blood. Have a doctor check potassium levels while taking Yasmin, especially during the first cycle of the medication. Examples of these medications include Benazepril, Captopril, Enalapril, Irbesartan, and Valsartan.

Taking Cytadren, Emend, St. John’s Wart, Provigil or Protease Inhibitors and Yasmin together will lessen the effectiveness of Yasmin. If taking Yasmin for the prevention of pregnancy, rather than for the treatment of PMDD or POS, use a back up method of contraception.

Before having sexual intercourse while taking an antibiotic, consult a physician to see if an additional method of protection is needed. It has been shown in general oral contraceptive studies that antibiotics can interfere with the effectiveness of these drugs.

If one takes Theophylline, Cyclosporine, or Selegiline, it may be better to pursue a different method of contraception. Yasmin increases the levels of these three drugs within the blood, which increases the chances of having side effects from these drugs. In some cases, the reduction of dosage of these medications is enough to prevent the side effects of Yasmin being taking together with one of these drugs.

Lipitor increases the level of Yasmin within the blood stream, which will increase the chances of having side effects from Yasmin. Speak with a prescribing physician before taking these medications at the same time.

Barbiturates, such as Amytal or Nembutal, and certain seizure medications, such as Topomax or Dilantin, can potentially cause the body to metabolize the hormones in Yasmin too quickly, which will decrease the effectiveness of Yasmin. Speak with a physician to see if oral contraceptives can be an efficient method of birth control or if another method will be necessary.

Carefully evaluate the current medical situation with a physician before beginning Yasmin for the prevention of pregnancy or the treatment of PMDD or POS.

When to Visit the Gynecologist