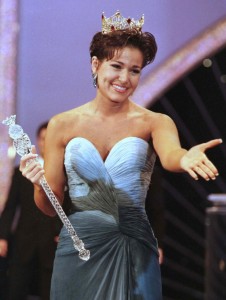 Heather Renee French, a 24-year-old fashion design student at the University of Cincinnati and this year’s Miss Kentucky, became Miss America 2000 on Saturday amidst tiaras, roses and tears. French’s platform is aid for homeless veterans, which is certainly valuable. French also was the winner of the swimsuit competition. Was it her patriotic political stance or her great bikini figure that swayed the judges? Heather French is the “girl next door.” Unless she’s very good at concealing the skeletons in her closet, French is unmarried, has never divorced, has never aborted a child, and has never posed for Penthouse. Thank god she hasn’t–Vanessa Williams, after all, was forced to give up her crown in 1985 to runner-up Suzette Charles when Bob Guccione released her image in some lesbian porn without her authorization.

Interestingly enough, one more vocal Miss America protest recently has come from the pulpit of Jerry Falwell. In the weeks before the 2000 pageant, Miss America organizers debated the termination of set moral standards for pageant competitors. Historically, Miss America participants could not be divorced, nor could they have experienced an abortion. In the current installment of his Falwell Confidential, Falwell writes, “Thankfully, due primarily to complaints from state pageant officials across the nation, the new rules have been at least temporarily halted. Miss America organizers wanted to change the rules and ask participants to state that they are presently unmarried, not pregnant, nor the natural or adoptive parent of any child. Critics said the new questions could actually lead some participants to choose abortion in order to be able to answer questions in a way pageant organizers were seeking. The board of the Miss America organization apparently attempted to change the standards out of fear of violating New Jersey’s anti-discrimination laws.”

Falwell quotes Dr. Joyce Brothers‘ praise of the anticipated rule change as saying, ‘I don’t think it’s rational to expect virginity these days.’ “I guess Dr. Brothers has not heard of campaigns across this nation that have seen untold numbers of young people commit to a chaste life until the days of their marriages.”

Falwell again notes, “The reigning Miss America, Nicole Johnson, also criticized the planned rules changes, saying, ‘To deviate at all from those traditions, standards and principles saddens me.'”

Luckily, the judges have voted Heather French worthy of maintaining these traditions, standards, and principles–the same ones as of 50 years ago. Of course, she can wear a bikini–a new convention deemed completely amoral in the pageant 50 years ago. But French won the swimsuit competition.

Would Falwell argue with those standards of decency?